This weekend, I attended ComiCONN at the Foxwoods Resort Casino in Connecticut. I was actually there on behalf of another body, Exploring Comics, but while there I ran across a small local tabletop game developer called Angry Duck Games and we had a great chat.

They were providing a promo of their new game, which stands out to me in a number of ways. Student Bodies is a board game in which players must make their way through a zombie-infested high school. However, unlike many other zombie infestation stories, the players are neither equipped to handle the crisis nor are they trying to avoid infection. Each player, in fact, begins play as a high school student that’s already bitten, but not yet turned. Using the limited skills and knowledge available to the average (and I do mean average) high school student, you must fight through the hordes of undead and beat the other players to a promised single dose of antidote at the other end of the school, find out which chemical in the lab is actually the right one, and then escape the building with your prize before the military destroys the school and everything left inside.

Obviously, this is a highly competitive game. Lots of zombies, one antidote, and only so much time. There’s a lot of teen angst and drama available here!

Not a competitive gamer? Rejoice in knowing that there’s also a cooperative aspect! All you have to do to change the feel of the game is die!

When your character dies, instead of sitting out the rest of the game, you begin playing a zombie. And all the zombies are one big happy team with a shared objective: stop and, if possible, eat the other players.

While talking to Tim Lee, product manager and publisher with Angry Duck, I also had the opportunity to watch some of the game in action, and it looks really fun. They estimate the game taking about 45 minutes, and while I don’t actually know the top end of how many players can participate, they had four actively involved. It will be a great addition to any game night that has room in its cold, dead heart for horror survival and youthful violence. They have a lot of other projects in the works, and we have opened discussion about having access to those as soon as they become available for review, so keep an eye out here for more from Angry Duck Games!

Student Bodies is available from the ADG store for $40 and is recommended for ages 14 and up.

Gnome and Tara get their hands on Manicdotes!. This social, storytelling card game is a fun way to kick-start your game night!

Manicdotes!, created by Michael Hanson, “is a fun, fast-paced, challenging, social, storytelling card game. As the Storyteller, you are given an opening line (Story Starter) and a list of keywords (Words Card) that must be entwined into your tall-tale. Players must listen carefully to your fast-paced fable to identify which words were pulled from your Words Card. Manicdotes! is designed to be a fast-action experience that can be played time and time again.”

Gnome and Tara invited a few friends over to play this social, storytelling game! After several rounds, Tara was the victor and both she and Gnome had a solid understanding of the overall purpose of the game!

As with all of the Hexes & Bows reviews, Manicdotes! was scored on five categories: packaging, components, rules, replay value, and cost. Each score is the best out of 5 with 5 being the highest, most desirable score to achieve.

Both co-hosts strongly agreed that the packaging for Manicdotes! is the best overall selling point of the game. It’s bright and bold color choices along with a fun and unique font left both Tara and Gnome feeling nostalgic. The game looks like it was transplanted from the 1950s into the modern era!

The components were a bit of a hit and miss. Included in the game are 150 Words cards, 30 Story Starter Cards, 6 pads of paper, 8 pencils, and a 90-second sand timer.

While the colors of the cards match the external look of box and remain bright and colorful, the card stock quality was poor. After unraveling the card decks from their original plastic revealed many edges of the cards already suffered from damage. The corners of the cards were either bent, frayed, ripped, or splitting prior to shuffling. Trying to shuffle the decks was a surgical process requiring gentle hands and alternative methods of shuffling in order to prevent additional bending and folding of the cards.

The 90-second sand timer was timed 10 times and each time came out at 92 seconds, which, isn’t that big of a deal since that is more than enough time to generate a tall tale with the words card!

Tara was not a fan of the pencils and paper, while Gnome saw them as neither an advantage or disadvantage to the game. They’re nice to have in the game, but, according to the components list, their box was shorted 2 pads of paper.

Perhaps the most important element of game is its rules. Overall, the rules and general jist of the game is relatively easy to comprehend. Players draw one Starter Story and one Words card, create a story in 20 seconds, then convey that story in 90 seconds to the

other players at the table who try and guess which words in the story generated from the Words card! First player to 25 points wins! It’s that simple.

Unfortunately, this level of vagueness left some questions being asked, particularly involving wording regarding the Story Cards, “topics,” and “categories,” which are not described fully in the rules, if at all.

It is easy to create your own set of rules for the game and the official rules offer alternative ways to play the game or make it more challenging!

As with most investments, at least between Gnome and Tara, the ability to replay a game over and over and over is exceedingly valuable. Manicdotes! can quickly become a predictable game. After a few play-throughs, a player may associate particular words with a card and simply “guess” the rest of the words in the story without having to listen properly.

One way to combat this, as suggested in the rules, is by drawing multiple Words cards and then selecting the first word on each card! This method deals with the repetitive association of words that would otherwise decrease the replayability far too soon.

Manicdotes! retails for $19.95 on Amazon, which is the only store to currently purchase the game from that Hexes & Bows could find. While Amazon includes 2-day shipping in the overall cost for “free shipping,” both Tara and Gnome felt the cost was relatively fair for a game “Made in America.”

Ultimately, Gnome and Tara collected their scores and Manicdotes! earned itself an average overall score of 3.34/5.00. Listen to the podcast for the complete breakdown of the score!

Leave a comment below if you’ve played the game! We’d love to know your thoughts on it!

In this special podcast, Gnome sits down with co-author Tristan Zimmerman of Archive: Historical People, Places, and Events for RPGs on Kickstarter until June 5th!

According to the Kickstarter page:

“Archive is a collection of adventure sites, NPCs, and events ripped right out of history and perfect for your campaign. It’s a 265-page book with 80 subjects. All have everything you need to make them come alive at your table: sights, smells, history, local color, and even plot hooks and ideas to help you adapt them to your campaign setting.”

Tristan discusses his inspirations behind creating the book. We also dive into exploring our own, very real, history and incorporating those people, places, and events into a fantasy setting! Tristan explains that using history can help flush out and bring a level of realism to your RP setting, suggesting that, “one of the interesting things about the greats of fiction, whether that’s RPG fiction, or genre fiction… is that they draw directly from the real world.”

With Archive: Historical People, Places, and Events for RPGs you’ll be able to learn about exotic lands, extraordinary people, and unique events from history that may be your inspiration for new and exciting elements that help bring your RPG campaign to life!

Archive is a seemingly great investment for history buffs and DMs, and, for only $10, there’s really only knowledge to gain and none to lose! The $10 backer reward will receive a pdf copy of the book and $30 will get a backer a physical print! There’s still time to support this incredibly resourceful RPG tool here!

If you end up backing the book, please let us know! We’d love to learn what elements you used in your campaign setting! 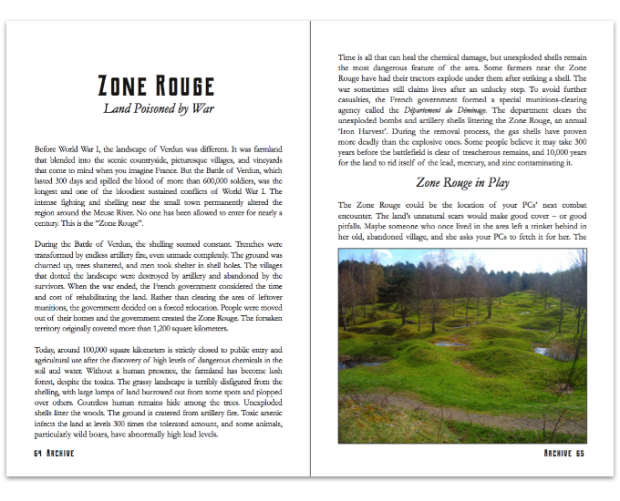